A book I contributed to with Jeff Pettis and John McGuckin called Seeing the God:  Ways of Envisioning the Divine in Ancient Mediterranean Religion from Gorgias Press has finally gotten into the pre-ordering and previewing sections of different websites.  You might want to check out pp. 147-188 especially, for my chapter on "To See God and Live in Late Antique Judaism."  It is definitely a book to order for your libraries.

Update: I just received my contributor's volume, and so it should not be long now.
Posted by Jared Calaway at 3:21 PM No comments:

The Biblical Archaeology Society at Bible History Daily has a round-up of the top twenty archaeological discussions of 2012.  Check them out here.
Posted by Jared Calaway at 11:13 AM No comments:

Email ThisBlogThis!Share to TwitterShare to FacebookShare to Pinterest
Labels: Archaeology

Jim Davila reports that his translation of an eclectic text of the macroforms Hekhalot Rabbati, Sar Torah, Hekhalot Zutarti, Ma'aseh Merkavah, and Merkavah Rabbah as well as some microforms and the Geniza Fragments will be published by Brill.  His current title is Hekhalot Literature in Translation: Major Texts of Merkavah Mysticism.   Congrats Jim!  I will be looking out for this one!  Maybe I will get back to my old series of "Daily Hekhalot."
Posted by Jared Calaway at 8:39 AM No comments:

So there have been a few Doctor Who mash-ups the past day.  I thought I would review:

Joel Watts had this picture of Doctor Who and Firefly: 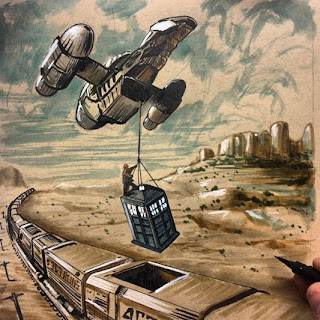 And then James McGrath had a couple of Pics of Doctor Who and LOTR.  My favorite it the "short version" of LOTR: 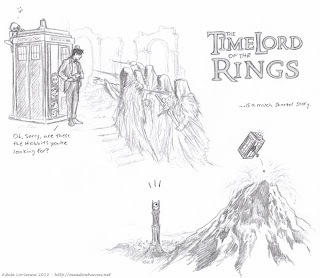 The Source of which can be found on Adelle Lorienne's gallery here.  Click through:  she also has a Doctor Who/Sherlock mash-up.

Posted by Jared Calaway at 10:10 PM No comments:

Email ThisBlogThis!Share to TwitterShare to FacebookShare to Pinterest
Labels: Doctor Who, Firefly, Lord of the Rings

Israel's National Library has come into possession of a cache of thousand-year-old manuscripts from Afghanistan.  See info here.  Here are some snippets of the press report:


A trove of ancient manuscripts in Hebrew characters rescued from caves in a Taliban stronghold in northern Afghanistan is providing the first physical evidence of a Jewish community that thrived there a thousand years ago.


The Afghan collection gives an unprecedented look into the lives of Jews in ancient Persia in the 11th century. The paper manuscripts, preserved over the centuries by the dry, shady conditions of the caves, include writings in Hebrew, Aramaic, Judea-Arabic and the unique Judeo-Persian language from that era, which was written in Hebrew letters.


The documents are believed to have come from caves in the northeast region of modern-day Afghanistan, once at the outer reaches of the Persian empire. In recent years, the same caves have served as hideouts for Taliban insurgents in Afghanistan.

One should note these documents were not found in situ, and it is believed that several more are probably circulating among antiquities dealers.  Once all of the information is collated, it should provide a window into a Jewish community on the outskirts of the Persian Empire and illuminate our understanding of the history of the spread of Judaism in the Middle Ages more generally.
Posted by Jared Calaway at 5:20 PM No comments:

Raider's of the Lost Ark and University of Chicago Admissions

A little New Year's Day frivolity:  the Chronicle of Higher Education reports a fun piece of a mysterious package that came to the admissions office.  It was the journal of Abner Ravenwood addressed to the university's most famous fictional professor:  Henry Walton Jones, Jr.  It shouldn't be behind the pay wall so you can read about it here.
Posted by Jared Calaway at 12:14 PM No comments: