According to the Chronicle of Higher Education, current students and alumni from Barnard College as well as Columbia are drafting an online petition to deny tenure to Nadia Abu El-Haj, assistant professor of anthropology at Barnard. They claim that her research, particularly her book, Facts on the Ground: Archaeological Practice and Territorial Self-Fashioning in Israeli Society, distorts the evidence and is skewed against Israel. According to the Chronicle, "The petition, which has drawn just over 1,000 signatures, accuses Ms. Abu El-Haj of ignoring or mischaracterizing large parts of the archaeological record, of not being able to speak Hebrew, and of treating Israeli archaeologists unfairly in her work." If true, I think not being able to speak Hebrew would be particularly damning if that is the primary language of the work she is examining.

I have not read her book, but I have heard quite a bit about it, always in a very charged context. In any case, I refrain from making direct evaluations about something I have not read. But I would like to make some comments about archaeology and nationalism in general and perhaps a few comments on archaeology in Israel. If you look at the history of modern archaeology, it always seems to be intertwined with the rise of modern nationalism. The Greek Archaeological Association was created with the birth of the modern nation-state of Greece to recover essential "greekness." In fact, if you look at the earliest digs from this group, the most famous being that of the Acropolis, you might notice that they tore away everything until they got to 5th century BCE Periclean Athens (so, they removed everything from the Byzantine and Ottomon periods). By today's archaeological standards, however, the Athenian Acropolis stands as a prime example of bad archaeology. And they are now in the awkward position of trying to reconstruct some of the structures from later periods. This is even true, or perhaps especially true, of more imperialistic nation-states, especially those groups that conduct digs in other countries in order to provide a narrative of their own national origins OR, if not origins, their own national imperial power. Napoleonic archaeological exploits, especially in Egypt, are probably the most famous in this regard. And who can forget the Germans actually removing the absolutely gargantuan Pergamon Altar to Berlin? The British relationship with Greece is particularly famous, especially the fiasco with "Elgin's marbles." So, if Israeli archaeology has been used or been implemented to reconstruct an origins myth, they would be doing exactly what most archaeologists of many countries have done in the past couple of centuries. This is not to say that this is good archaeology (it is not!), but just to say that bad archaeology has been quite common and been implemented if not invented for nationalistic and imperialistic (it is often difficult to distinguish between the two) endeavors.

But current archaeologists do recognize the problematic nature of their field, especially its past, and they are doing something about it. Greek archaeology is much more sophisticated than it used to be, and later layers of rubble are being taken seriously (those of late Roman, Byzantine, and Ottomon periods). And, if you know anything about current Israeli archaeology, you know that Israeli archaeologists do not agree on the interpretation of anything! Most of them are very skeptical about the biblical sources and are more likely to deny that their site supports any textual evidence, or would be quick to point out how the material evidence gives a completely different picture than anything that can be reconstructed critically or uncritically based upon the surviving texts. This is not to deny that there are many still out there who are seeking to affirm biblical evidence, often squeezing the archaeology into the texts, but this is just to note the variety of views of Israeli archaeologists and that the field has significantly changed over the years with much more sophisticated methods and a great deal more of healthy skepticism.

In the end, this is not the first time Columbia University or its affiliates has been at the center of Palestinian-Israeli debates, as most of my readers know or perhaps even know better than I do (see some of the recent posts on Kishkushim). And I have a strong feeling that we will be hearing a lot more about this in the coming months.

Mimesis, or the Akedah Lives Again

During World War II, Erich Auerbach wrote his monumentally important study called Mimesis, while he was in exile. It begins its history of mimetic literary representation with a comparison between the revelation of Odysseus's scar in the Odyssey and the Akedah, or "binding," of Isaac in Gen. 22. This story from Genesis has reverberated throughout the centuries. You can find it in the Maccabean literature to describe martyrs, or, more accurately, to encourage martyrdom (ironically, since Isaac never died in the original story), there are hints that early Christians applied the story to Jesus, to medieval massacres of Jews in Europe (see Shalom Spiegel's fanstastic book called The Akedah), and the story has resurfaced in a new guise today.

Non Sequitur here. I have recently began to watch a new show on TNT called "Saving Grace." Grace is a cop who drinks, sleeps with married men, etc., and is basically on God's "last chance list." An angel named Earl, who eats tacos and chews tobacco, is her guide (and she does not completely believe he exists). In the last episode, a very religious father and son duo enter the story. They are conservative Christians, and the father claims that God talks to him. This actually is not, in the parameters of the show, very difficult to believe, since Earl the angel keeps coming on the scene to talk to Grace. But, even here, things start to appear a bit cooky or scary. The father tells the police to guard his son closely (he was being guarded already because he was a witness to a high profile case), because God had told him that he would not live to see his 18th birthday, and, lo and behold, the son was to turn 18 that very night at midnight (or 12:01, for you picky people out there). Indeed, just before midnight, someone knocked out the guard protecting the child and kidnapped him. BUT it was the boy's own father. In the next scene, the father holds a knife to his son's throat while he is being surrounded by police. He claims that, in fact, God told him that he would have to carry out the prophecy (that his son would have to die that night).

This story has Abraham and Isaac written all over it, down to the use of a knife for the sacrifice and the divine command. The biblical story has been interpreted many ways, of course, as all multivalent texts are. It has been understood to represent the shift from human sacrifice to animal sacrifice in Israelite society (this is a scholarly interpretation, of course). Since antiquity, however, the story has been interpreted to highlight Abraham's righteousness, obedience, and faith as well as Isaac's obedience and faith. Perhaps obedience more than anything. But, in the modern environment, when seeing a new iteration, it appears more like fanatacism or mental instability.

This raises the question: can someone have too much faith? be too obedient? I have often considered it my calling and, in fact, my duty in the classroom to bring doubt and to encourage questioning when and where certainty have long held sway. Can you really have faith without some doubt, anyway? At what point can obedience slip into blindness?
Posted by Jared Calaway at 2:13 PM No comments:

Long Time No Hear: What to do about it? 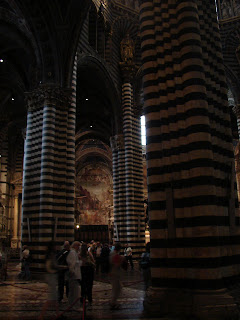 Dear faithful readers of my blog. I apologize for the lack of posts as of late. I have been extraordinarily busy with my dissertation prospectus and another monumentous project. So, to satisfy you, I shall give you some eye candy of a picture or two I took in Italy this summer whenever my substantive posts become sparse. Enjoy!
This picture is from the Duomo of Siena, which, by the way, is probably one of the most touristy places I have ever been (Siena as a whole, not the Duomo in particular). The Duomo is a medieval structure, and the interior, as you can see, is characterized by black and white striped stone pillars (it actually reminded me of the costume of Beetlejuice at the very end of that eponymous film starring Michael Keaton in one of my favorite movies of his). It is an absolutely beautiful building. The church also claims to have the very arm of John the Baptist with which he baptized Jesus. Although the city is extremely touristy, I was somewhat sick when I was there, and I misled my family regarding the bus routes there (not intentionally of course), this church is worth seeing if you are ever in the area.