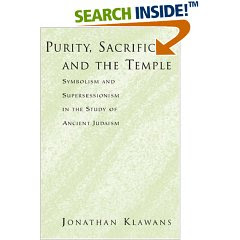 Interesting. But before 'Jesus' was created for 'Christians', and before 'prayer' was instigated for for Jews, Judas had been along with his new philosophy that widened the gap between priests and prophets. For Judas, the Spirit of God was to be Lord - to be obeyed before the Law. He was, in effect, the first Christian, with Matthias, possibly his twin brother. The events surrounding Judas are garbled in the writings attributed to Josephus. The evolution was with Judas. It was he who was anti animal sacrifices.

Like Romans, Hebrews was originally an Epistle all about the Spirit, whose presence could be seen in the sanctuary of the prophets - a sanctuary still in existence at the time of the original wrtiting.

Does Klawan's refer much to Josephus?

Yes, Klawans does refer to Josephus, but mostly regarding his portrayal of the Temple, especially Temple symbolism (the Temple as microcosm).

If Klawans was responding to evolutionary temple scholarship, then Klawans should have made more use of Josephus. Although the extant text says Josephus was a priest, there are no signs that he ever practiced as one, but there are plenty that he thought of himself as a prophet. And clearly, Josephus was fixated by Judas whose colleague (twin brother?) was one Matthias - a name that just happens to be the same name as Josephus' father.

Josephus probably took upon a prophetic role (most famously the prediction that Vespasian would become emperor) BECAUSE he was a part of the priesthood. More and more scholarship is showing the ways that priest/prophet dichotomies are false, and the roles of oracles (the Urim and Thummim of the high priest is the most famous example here) and some sorts of "divination" (for lack of a better word) practiced by priests.

Well yes there was competition for the favours of the ruling monarch who probably played priests off against prophets.

The non-existent 'Pharisees' in favour with Alexandra (War 1.5.2) were no doubt 'Essenes' or prophets. These were possibly the 'seekers of smooth things' of the DSS who despised the law, that is in the eyes of the writers. The TOR of the DSS was no doubt a high priest, who saw himself as a prophet, but whined about being rejected by the rulers of Jerusalem. (Golb sees the DSS as coming from Jerusalem).

Herod clearly favoured 'Essene' prophets. From his fortress at Masada, Herod could keep a friendly watch on those 'Essenes' just down the road at Ein Gedi. He was no doubt fearful of the messianic priests, and kept them suppressed.

During the first revolt, after the priests (sicarri) occupied Masada, they butchered the 'Essenes' (prophets) of Ein Gedi, apparently for being friendly towards Romans.

There are indications in Acts that priests became obedient to the Spirit (not the faith). (Acts 6.7). So Josephus, possibly a hereditary priest, showed no signs of practicing as a priest. He was one of the earliest 'Christians'. Much of his original writing was focussed on Judas and his new movement of the Spirit. He gives several signs (garbled by editors) that there had been a deteriorating relationship between priests and prophets, culminating in Judas's new movement - the cause of the revolt of the messianists against the Romans who favoured the more friendly prophets.