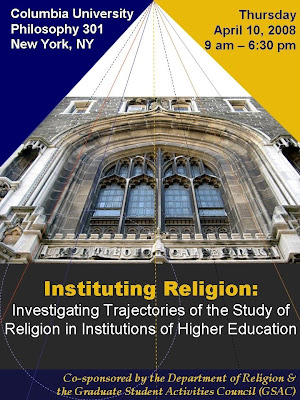 If you are going to be in the New York City area on April 10, please feel free to stop by and hear some up and coming graduate students speak.

For a schedule and to register (for free), check out our website: www.columbia.edu/cu/religion-gsa
Posted by Jared Calaway at 10:57 PM

Saint Tara Chand Ji Maharaj generally used to say in his discourses– Brahamana (a higher cast in Hindu cast system) is that man who has dissolved himself into Brahamic (cosmic) consciousness. He does not accept donation, but tries to give, whatsoever he has, to the needy, indigent and destitute. Power of Word, the Creator, reveals in his soul which fulfills all his desires. The Lord of imaginations (Kalpavriksha) accepts his offerings of Love and devotion and provides all the treasures of life to him. Saint Charan Das says-

Brahmana is that who identifies Brahman (God) in himself

Becomes introvert and seeks the vision of Lord

His senses cease to travel outward

He nurtures compassion for every creature

He becomes devoid of passions, anger, lust, greed and ego;

Brahmana is that who possesses these virtues.


We are devoid of internal treasures embedded in the deeper layers of our Self because we have not identified the hidden enrichment inside. The actual bliss lies inside but we are groping outside in the gloomy world of passions and grief. We are adopting lopsided approach which create imbalance in our life energies. The outer achievements are dominating over the spirit of rationale and wisdom which has created imbalance between the inner and the outer world. The result is tension, instability, selfishness, individuality, unhealthy competition, nepotism, communalism and terrorism.

The reason of this imbalance is that we have not awakened the spirit of Wisdom seated in the middle of eyes (Third eye); the Lord of which gives all the orders; all the actions originate from this sphere (Ajya Chakra) of actions. Ajya means command, Chakra means sphere. All commands emanate from this sanctioning authority. All the senses respond to the mandate of this housing spirit. But the inner Self of this sanctioning authority has been sleeping in his den for innumerable lives. We have not made efforts to awaken its power which is sleeping encoiled for many past lives. When it awakens, the life force starts dancing which is seen and enjoyed by the devotee, the yogi.

The Hindu scriptures have called this state as the ‘Awakening of Serpentine power’. It is called serpentine power as it opens its vistas of light like the expanding and contracting face of a snake. Sri Aurobindo has called it Psychic being who is the actual representative of Supermind and master of transformation in this phenomenal world of actions and reactions, and cause and effect. It is the immutable spirit which dwells in the mutable spectrum of physical consciousness. It is the glimmering spark of eternity amidst the fort of dark forces of relative existence. Bhagwat Gita has narrated this power as Kshara Purusha; the mutable Spirit of universe which goes on changing upto the time this cosmic play persists. This Kshara Purusha is the Lord of Works and Psychic being remains in its fold as the representative of Supreme Being, the Satpurusha. It coordinates and commands all the activities of this Ksaras Purusha in any individual existence. Upto when this psychic Being is not awakened, its spirit remains liable to mutability and perishability and remains the instrument of the changes of time, space and causation. It follows the principle of cause and effect. Its eternity does not manifest in its self. Its bliss does remain unveiled and disguised. The friability and fragility of its grounded nature becomes slave of lust and passions. Problems, sorrows and grief of the lower nature remain integrated part of its spirit. This state of helplessness and weakness of the spirit is called ‘Jiva’ in Hindu jurisprudence. When this spirit identifies its natal strength of Real nature, Para-prakriti, Para-shakti or Radha, it awakens and the higher nature of imperishable, intangible and immutable Purusha descends into the brittle regime of Ksara Purusha and dismantles the domain of illusion and hallucination. This immutable spirit has been called as Aksara Purusha, Aksara Brahman or Shabd Brahman; the eternal and imperishable power of Supreme Being which manifests through the melody of celestial Song (the Word Power) in the universe.


This Aksara Purusha or Brahman is the Lord of knowledge; the originator of all the streams of mental consciousness from where outflows all the gnosis of visible and invisible spheres of the existence. Discriminative power of mind and wisdom are the results of the outpouring of this Sun of luminous knowledge. Lord of Works draws its vitality from this Sun of gnosis. This Purusha has also been called Savitri-Surya or Gayatri-Surya. This sphere of consciousness is the golden womb, Hirnaygrabha; the womb of universe where lies all the seeds of this universe. The universe takes birth from this womb of Lord of knowledge; the Aksar Purusha.


There is third layer of consciousness which reconciles the opposition of Ksara and Aksara, mutable and immutable, God and non-God, thesis and anti-thesis. All the physical, vital, mental and spiritual forces become satiable in this stratum of consciousness. All works, all knowing and unknowing plunges into the ocean of Bliss of this Purusha (Soami), the Satpurusha or called Purushottama in Gita. Sri Aurobindo calls this state of bliss as the Supramentalisation of the being. This realization of the Self can come through self-giving as it is the inherited legacy of the Lord of love and devotion. The fortified spheres of Ksara and Aksar can only be surmounted and churned through the intense longing of love and devotion for Satpurusha. This realization goes beyond all the boundaries of abysmal lows and sublime highs. All the limitations and perceptions of life, mind, gods, and non-gods, virtues and non-virtues get vanished after taking a sip of the ambrosia, Amrit, of the sanctity of Satpurusha.


The path of self-realization starts with the awakening of sleeping power lying within ourselves. It is called opening of Third eye. Buddha says it Divya Chaksu, supernatural eye of brightness. Mahavir Swami says it Param Jyoti, the supreme Light. Hazrat Muhammad calls it Noor; Light as the embodiment of Allah. Jesus Christ calls this experience as the Light of the world. In this experience, supernatural powers of gods and goddesses of goodness and virtue shower their grace on the yogi. The endowed grandeur of cosmic energy starts flowing unobstructed through the yogi as through a vessel of Supreme Being. But this opening of third eye is the initiation of spiritual realization. It is the opening of consciousness of Ksara Purusha, the Lord of Works or Virat Purusha, from where all the physical and gross form of cosmos originates. It is the starting of celestial or heavenly experience.


Kapil, an Indian sage, calls this state of realization as the attainment of the power of discrimination, Vivekkhyatiprapti, and intuition. Patanjali Rishi narrates it the vision of cloud of Virtue, Dharammegha Samadhi. Sankaracharya, Sri Aurobindo and other seers of reality have called it the experience of Samprajyat Samadhi, a state of trance where all unknown becomes known. Vedic literature says when the Sun of Truth rises, the dark of ignorance vanishes; tat satyam suryam tamsi ksiyantam. This Sun of Gnosis remains refulgent for ever within the soul of yogi; adityavat prakashyati tat param. When this Sun shines inside the Soul of yogi, every kind of knowledge starts flowing towards him; yasmin vijyate sarvam vijyatam.


When yogi surpasses this experience of refulgence, he reveals the truth in the form of superconscient light; not visible even with the supernatural eye of the Being. The fervour and intensity of this light becomes so dense that it is not visible through the celestial eye of gods; the Third eye. This is the experience of Sahasrara; the seat of Param Purusha (Supreme Being). This experience has been known as the realization of Nirvikalpa (beyond all alternatives), Asamprajyat (beyond all knowledge) and Nirbeej (devoid of all the seeds of happiness and sorrows) Samadhi. Christian mystics have called this state as the ‘Dark night of Soul’ or ‘Dark Secret’; the experience of which was engrossed by Prophet Moses on Mount Sinai. In this experience he was enveloped by a cloud of darkness when he approached the abodes of God. It is a blissful experience where the spirits of God and non-God get immerged into the ocean of Bliss of transcendental Eternal. The experience of Sahasrara has been considered just a milestone in Radhasoami Yoga. It is the lower seat of Brahamic (Cosmic) consciousness.

Osho opines that upto when the Ajya Chakra, is not awakened, man cannot break the shackles of slavery. He always remains in bondage of physical, economical, social and religious slavery. A slave of many masters, inner slavery as well as outer; an instrument in the hands of whimsical and unflinching forces of lower nature. Once released from the clutches of one master, he is incarcerated in the prison of another. He can not give command; he is not capable of giving command. He can only accept the orders because his power of Command, Ajya Purusha, is sleeping.


Tantric philosophy says that senses are the food of third eye. This eye is hungry for many lives because it has undergone through the trance of deep sleep thereby losing its sense of intuitive discernment. The gate of its sensibility has been locked. Key is missing. Key which can awaken the serpentine power has been lost. The treasure can only be unearthed with the key of wisdom and the power of true discrimination. This enclosed bud can open its petals of wisdom only through the incense of psychic enlightenment. Once this psychic awakening is realized, the gates of benevolence and magnanimity will open. All the treasures of life and knowledge will become accessible. The adamant and obdurate walls of ego and ignorance will shatter and their consciousness will ultimately transform into the gnosis and bliss of superamental Power. The impressions of grief and hunger will vanish from the mantle of humanity. The sense of self-giving will dominate the sense of wit and the doors of ‘Heaven on Earth’ will be opened to the aspiring humanity.


The sign of true religion is that it makes a man independent and provides redemption. It does not imprison him through the temptation of heaven and fear of hell. God lives within and it can be revealed by self-giving as love and devotion is the soul of supreme Realization.


This realization is complete in all the respects. It fulfills a person in totality. The beauty and outpouring of enlightenment from the Self enriches the depleted consciousness of body, life, mind and psyche.