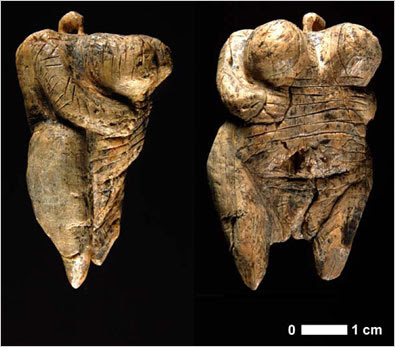 When a NYTimes article is headlined as "Ancient Figurine of Voluptuous Woman is Found," it is difficult not to read further!

May 14, 2009
Ancient Figurine of Voluptuous Woman Is Found

By JOHN NOBLE WILFORD
No one would mistake the Stone Age ivory carving for a Venus de Milo. The voluptuous woman depicted is, to say the least, earthier, with huge, projecting breasts and sexually explicit genitalia.

Nicholas J. Conard, an archaeologist at the University of Tübingen in Germany, who found the small carving in a cave last year, says it is at least 35,000 years old, “one of the oldest known examples of figurative art” in the world. It is about 5,000 years older than some other so-called Venus artifacts made by early populations of Homo sapiens in Europe.

Another archaeologist, Paul Mellars of the University of Cambridge in England, agrees and goes on to remark on the obvious. By modern standards, he says, the figurine’s blatant sexuality “could be seen as bordering on the pornographic.”

The tiny statuette was uncovered last September in a cave in southwestern Germany, near Ulm and the Danube headwaters. Dr. Conard’s report on the find is being published Thursday in the journal Nature.

The discovery, Dr. Conard wrote, “radically changes our view of the origins of Paleolithic art.” Before this, he noted, female imagery was unknown, most carvings and cave drawings being of mammoths, horses and other animals.
Scholars say the figurine is roughly contemporaneous with other early expressions of artistic creativity, like drawings on cave walls in southeastern France and northern Italy. The inspiration and symbolism behind the rather sudden flowering have long been debated by art historians.

Commenting in the journal on the new discovery, Dr. Mellars, who did not participate in the research, wrote that the artifact was one of 25 similar carvings found over the past 70 years in other caves in the Swabian region of southern Germany — “a veritable art gallery of early ‘modern’ human art.”

These sites, he concluded, “must be seen as the birthplace of true sculpture in the European — maybe global — artistic tradition.”

The large caves were presumably inviting sanctuaries, scholars say, for populations of modern humans migrating then into central and western Europe. These were the people who eventually displaced the resident Neanderthals, around 30,000 years ago.

Dr. Conard reported that the discovery was made beneath three feet of red-brown sediment in the floor of the Hohle Fels cave. Six fragments of the carved ivory, including all but the left arm and shoulder, were recovered. When he brushed dirt off the torso, he said, “the importance of the discovery became apparent.”

The short, squat torso is dominated by oversized breasts and broad buttocks. The split between the two halves of the buttocks is deep and continuous without interruption to the front of the figurine. A greatly enlarged vulva, Dr. Conard said, emphasizes the “deliberate exaggeration” of the figurine’s sexual characteristics.

As such, the object reminded experts of the most famous of the sexually explicit figurines from the Stone Age, the Venus of Willendorf, discovered in Austria a century ago. It was somewhat larger and dated at about 24,000 years ago, but it was in a style that appeared to be prevalent for several thousand years. Scholars speculate that these Venus figurines, as they are known, were associated with fertility beliefs or shamanistic rituals.

The Hohle Fels artifact, less than 2.5 inches long and weighing little more than an ounce, is headless. Carved at the top, instead, is a ring, evidently to allow the object to be suspended from a string or thong.

Its sexual symbolism should not come as a surprise, Dr. Mellars said, because at about the same time people in western France were chipping out limestone to represent vulvas. Nor were these Stone Age artists fixated only on female sexuality. Archaeologists in recent years have also found phallic representations carved out of bone, ivory and bison horn.

Posted by Jared Calaway at 7:54 PM