The Feast of St. Nicholas has already passed (it was Dec. 6), but since so many people relate him to Christmas it is still relevant news that his face has been reconstructed using forensic anthropology.

While many people may not have realized that Santa Claus was based upon a real person, St. Nicholas was an ancient bishop who lived in the late third to mid fourth century CE. He was born and died in Myra, a city in ancient Anatolia--modern Turkey. He attended the famous Council of Nicaea. He was particularly known for his acts of charity and giving anonymous gifts, hence many of the familiar traits and legends that began to grow around him.

But what I didn't know was that his relics--including his skull--lie in the Basilica de San Nicola in Bari, Italy, and having taken measurements of his skull, his facial features have been reconstructed.

So, here's what Santa Claus may have actually looked like: 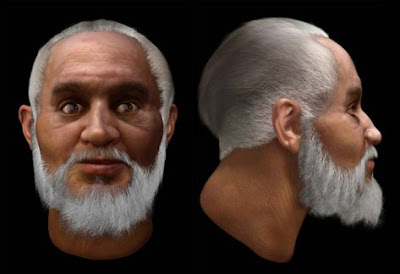 For background on the history of St. Nick and his remains, and the report on facial reconstruction, see here.
Posted by Jared Calaway at 1:59 PM