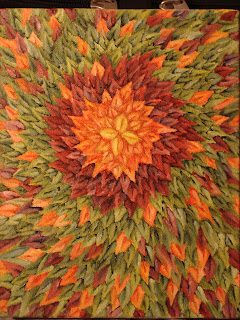 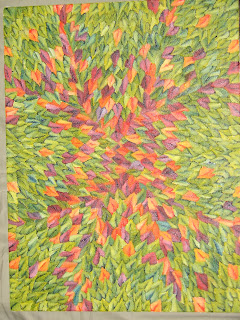 So, in my free time I paint. I had taken a few pictures of two of my more recent paintings, and I thought I would just share them with everyone. These two are very similar in subject--they are both leaves that form patterns based upon the direction they are pointed, but only differ in their patterns. The first is a "burst" pattern, after which the leaves start to spiral outward. In the second, the leaves move inward. The first has a bit more of a structured color pattern that becomes more and more random as one moves outward. The second's color pattern maintains a certain randomness throughout. Although the deep purples and the oranges tend toward the center in second as they are clearly so in the first. And, lastly, the first was painted for my sister and brother-in-law, while the second was painted for my girlfriend.
Posted by Jared Calaway at 2:40 PM

Email ThisBlogThis!Share to TwitterShare to FacebookShare to Pinterest
Labels: Painting

nice--- I really like the colors! (and the geometry)

An artist too! What wonderful paintings.