Two artists, one from Pakistan living in Queens and the other the child of Iranian immigrants living in New Jersey, in a conjoined show grapple with what it means to be Muslim, American, and women through their art. See the somewhat lengthy, but very interesting NYTimes article:

In Pakistan Ms. Ahmed Shikoh’s work had been sociopolitical, addressing what she saw as the country’s colonization by American fast-food chains, for instance, with paintings like “The Invasion,” in which swarms of Ronald McDonalds, wearing screaming-red clown wigs, surround a central monument in Karachi.

Here, however, her art turned deeply personal as she grappled with her new identity as an immigrant and, having rarely set foot in a mosque back home, as a gradually more observant Muslim. In her first American paintings Ms. Ahmed Shikoh reimagined the Statue of Liberty in her own image: in a Pakistani wedding dress, as a pregnant immigrant and as a regal mother, baby on hip. Next she transformed the subway map with paint and calligraphic script into an Urdu manuscript that made the city feel more like hers.

Finally, in 2006, after she made the difficult decision to cover her hair, inspired by Muslim-American women who managed to combine faith and a career, Ms. Ahmed Shikoh began using the head scarf as a recurring image. 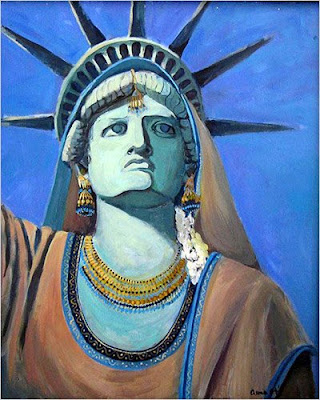 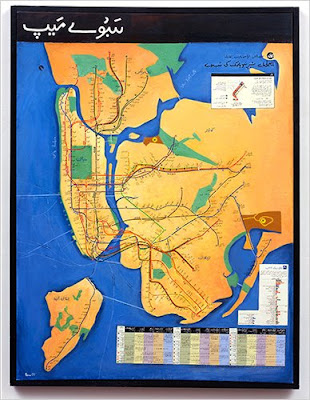 In contrast Ms. [Negar] Ahkami’s piece is playful, acerbic and polished. It consists of eight nesting dolls sumptuously repainted as “Persian Dolls,” in brilliant colors with gold faces. The outer doll is stern, with a thick unibrow, in full black chador. The ever smaller dolls within wear Chanel head scarves or cocktail dresses or, as with the tiniest, nothing at all but curves.

Although “Persian Dolls” is a sculpture, Ms. Ahkami is primarily a painter, of elaborate narrative tableaus in which she combines a Persian aesthetic with the psychological rawness of Western art.

Eventually, as Ms. Ahkami spent time at artist residencies, earned a master’s degree in fine arts, married and had a child, she forged a signature style by combining these impulses toward “the visceral and the refined,” in her words. Formally Ms. Ahkami borrows from Persian art but turns up the heat, making the colors more electric and the juxtaposition of swirls and patterns more “cacophonous,” as she put it. She also adds textures with glitter, primer and layers of paint.

Over time Ms. Ahkami has developed a vocabulary of icons: turbaned despots, melting mosques and exotic women with what she calls “Western fetishes” like feathery “Farrah Fawcett hair.” In her large canvases she sets miniature stories within the central narrative, as in “The Fall,” the whimsical centerpiece of her first solo Manhattan show, held in March at the Leila Taghinia-Milani Heller Gallery.

At 5 by 4 feet “The Fall” depicts streams of Iranians in exodus from a paradisiacal homeland in meltdown, traveling past Persianate horsemen over hills patterned like Persian rugs on the way to an uncertain — but consumerist — future.

Their work and the work of 13 other artists, can be seen in their exhibition, “The Seen and the Hidden: [Dis]Covering the Veil,” at the Austrian Cultural Forum in Manhattan.
Posted by Jared Calaway at 11:08 AM