My earliest posts on this blog were about my trip to Italy a couple years ago, and included a post on the ghostly Pompeii. I still like that post, although few of my current readers have read it to be sure. One memorable aspect of Pompeii, other than the preserved shadows of humans with hands raised against the oncoming Volcanic blast, is the remarkably preserved frescoes. One fresco, stolen twelve years ago, was just recovered here in NYC!

The fresco panel, which was the subject of an international search by INTERPOL, was located by the Art Loss Register of New York and brought to the attention of ICE and Italian Authorities. Italian authorities provided ICE agents via the ICE attaché in Rome with information and documents identifying the fresco panel as stolen and part of the cultural property of Italy.

The panel, rectangular with a white background depicting a female minister, white wash on plaster with a modern wooden frame, was previously located at the excavation office in Pompeii and was reported stolen with five other fresco panels on June 26, 1997.

The investigation revealed that, between 1903 and 1904, the Italian government authorized a farmer, Giuseppe De Martino, to restore his farmhouse, which was located on an archeological site in Boscoreale, province of Naples. During the restoration, six important frescos, originating from Pompeii were found.

On July 12, 1957, the Government of Italy purchased the frescos. On June 26, 1997, after the completion of work to the excavation site, the Italian government observed that the six frescos were missing and subsequently reported the theft.

The Carabinieri cultural patrimony unit previously recovered the other five of the six frescos.

"We are pleased to assist in the recovery of this fresco panel. It completes the collection of the six panels reported stolen from the Italian government close to 12 years ago." said Peter J. Smith, special agent in charge of the ICE Office of Investigations in New York. "ICE applauds the ALR for coming forward with information on the whereabouts of this precious cultural artifact, which will soon be returned to the Italian government.

Here's a pic of the fresco: 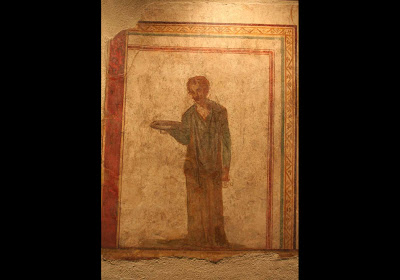 Posted by Jared Calaway at 1:46 PM