While reading an article on the archbishop of Canterbury Rowan Williams's statement on "two ways of being Anglican" I became less and less interested in the internal discussion of gay clergy and more and more fascinated by his eyebrows. 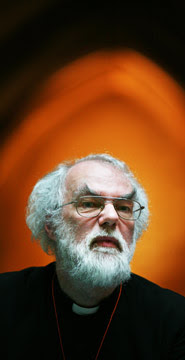 He must have the most spectacular looking eyebrows among Christian clergy. I think he would be a great addition to a Harry Potter film. If Michael Gambdon is willing to give it up, I think he has the look of an Albus Dumbledore.

Posted by Jared Calaway at 7:00 PM