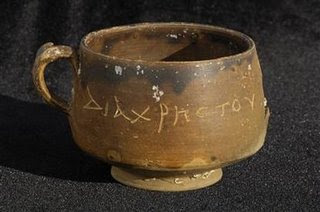 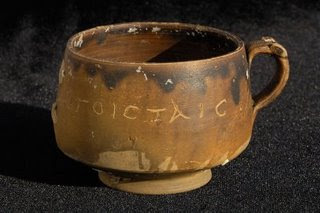 Ok...so I doubt it was used for coffee, but that is how I use cups that look like this. So, some people appear to be interested in this new find off the coast of Alexandria in an area that had fallen into the Mediterranean Sea. Underwater archaeological search has found many interesting finds in the area of Alexandria that has slid into the sea. This find is a fairly well-preserved cup that dates sometime between the second century BCE and the first century CE.
April Deconick has recently posted on it at Forbidden Gospels here. She has further links to others' posts there.
The cup says "diachrestou ogoistais." The "e" in the "diachrestou" is an "eta." One issue is how to divide the words. The first side is pretty easy: "dia chrestou." The second side is not so sure. But I tend to think it is "o goistais." Other word divisions are definitely possible, but I am not sure at the moment what they would be. The reason, now, this little cup is getting so much attention is that it has been interpreted as "by Christ the Magician." This reminds me of Morton Smith's theory argued in his book, Jesus the Magician (guess what his theory was). It would be the first mention of Jesus outside of the New Testament...and given the dating, to the first century!
But the dating is the first problem. The first century is the latest possible date. It could very easily be earlier, which would put quite a damper onthe whole "Christ" theory.
What does the inscription itself mean? Let's deal with the second side first. IF this word is divided as "o goistais," then "magician" is not far off, although it is probably not the best translation. The root word probably comes from goaw: "to enchant." The usual form of the noun form is "goes." Another form of this is "goates" and another is "goetes" (all the "e's" here are eta's). Since eta and iota, especially in diphthong form with the omicron would sound nearly indistinguishable, I have little problem with the spelling issues here. The combination of the sigma and the tau combines these many different forms together (particularly the first and the last).
It does not have to be "enchanter" however. The same verb goaw also means to wail, to weep, to lament. So, the person could be a mourner. The "enchanter" form actually seems to come from "to wail / howl out enchantments" (Liddell and Scott). So, it may mean "mourner" as much as "enchanter."
What about "dia chrestous"? As April has noted, this is probably overblown. While the eta / iota switch is possible, since this is so common in this period, Chrestos / Chrestus was a fairly common name in this period, especially among slaves since it means "useful one." So, perhaps this means, "through Chrestos the useful one, the enchanter / mourner."
Even so, do the two sides necessarily refer to the same entity? Probably, but nonetheless the useful one named Chrestos may not be the same person as the enchanter or mourner. So, perhaps you get to the enchanter through Chrestos, the useful one.
Of course, all of this is highly speculative and tentative. And, in fact, I doubt we can conclude much of anything from this little cup, which appears to have some connection to either "magical" or perhaps mourning rituals (or, perhaps mourning rites that include magical elements).
Although, who knows? Perhaps I would be amazed at what scholars two thousand years from now try to conclude from my fairly strange coffee mugs that I keep around should any of them miraculously survive. They may think my "Jesus Saves" coffee mug, which has a picture of Jesus cutting out coupons, was part of an important religious ritual. And they would be right...for what is more sacred than morning coffee? Other than brunch of course?
UPDATE: First of all, I have no idea why my paragraph breaks are not showing. Secondly, Jim Davila has a nice roundup of recent discussions of this "magic bowl" at paleojudaica, including a reference back to this very post. I must be moving up in the world... And despite my guesses above, I agree with Jim and others that no one really is sure about the meaning of "ogoistais." We are all guessing at this point.
Posted by Jared Calaway at 8:17 PM