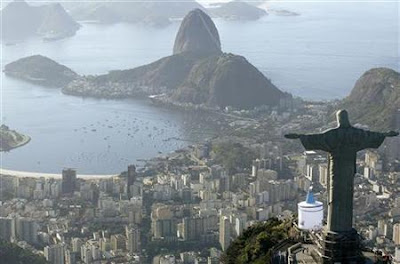 Holier than thou? Christ statue has rival
Tue Jan 6, 2009 3:56pm EST
SAO PAULO (Reuters) - A little-known Brazilian farming town with sugar cane wealth is set to upstage Rio de Janeiro by erecting a statue of Christ that will eclipse its famous equivalent atop Rio's Corcovado mountain.

Rio's iconic statue overlooking the beach-side city measures up at 98.4 feet high, but its much shorter pedestal gives it a total height of just 125 feet.

"Far from a pretense of grandeur, we're thinking about visibility," said Nerio Costa, mayor of the town 206 miles from Sao Paulo which hopes to inaugurate the 1.5 million reais ($681,000) structure at Easter.

But those suspicious that Sertaozinho, with a population of just over 100,000, is trying to rival the country's top tourist city can cite other evidence.

A 187-foot tall Jesus! This puts the atheist bus ads in London to shame!
Posted by Jared Calaway at 12:20 AM