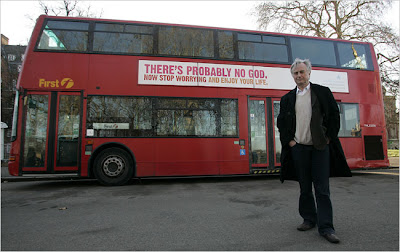 I had heard of this a while ago, but NYTimes has posted an article on the atheist advertizing in Britain on the side of buses. This comes in response to various religious groups posting ads on buses.

Here are couple of the ads:

"There's probably no God. Now stop worrying and enjoy your life." Dawkins, however, objected to the "probably." Others, believers in some sort of deity, objected that they believe in God and enjoy life, as if one excluded the other.

"Why believe in God? Just be good for goodness' sake." This is posted with a picture of Santa Claus--a religious figure, by the way.

Some people object in general, others, including people of differing opinions, claim every has a right to their own opinions and the right to freedom of speech. Some religious groups are actually happy about it, saying that it is increasing people's interest in discussing God.

This just demonstrates what I have thought for a long time now: atheists are much like fundamentalists--they are always proselytizing. Dawkins, like fundamentalists, claim to know something with absolute certainty. I tend to think we can have almost no firm knowledge about anything. We can only approximate with probabilities--at least, that seems most probable. A radical agnosticism!
Posted by Jared Calaway at 11:37 PM

And just like fundamentalists, atheists, at least the Dawkins/Hitchens/Harris/Maher-style new atheists, have no ability to have a discussion with anyone in which their certainties (like the beliefs in objective reason and the promise of progress through science) are even remotely questioned.