Obama, Islam, the New Yorker, and the Politics of Fear

On the cover of the latest New Yorker magazine, there is a sketch of Barack Obama dressed in a turban and Muslim garb, giving a fist pump to his wife, who is holding an AK-47. They are in the Oval Office, with an American Flag burning in the fireplace, and a portrait of Osama bin Laden on the wall.

The New Yorker claims that this is just satire, and it is part of its article on the politics of fear, meant to mock the portrait that Obama's right-wing critics have painted of him. But Obama isn't laughing. For others, it seems, the satire just falls into the right-wing critics hands, playing into their imagery (or the New Yorker is not implicated in what they critique).

The problem is a matter of consistency. If one wants to do this type of satire, one should consistently do it; otherwise, it can be misinterpreted, as this particular cover was. For example, I think that Stephen Colbert, who engages in this type of satire very consistently, could more easily get away with it. Not that the New Yorker is not satirical, but it is usually satirical in small bits, with small cartoons inside that mock a point of view to a more limited degree. The fact that the satire here had to be explained by the New Yorker shows that it was not done well or that it was done to a further degree than usual.

The following is from the New York Times and includes the cover itself:

Updated SAN DIEGO –- As he flies around the country, Senator Barack Obama has a fondness for magazines. The New Yorker is often among the titles at the front of his campaign plane. 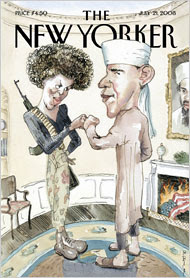 The July 21 cover of The New Yorker.

The issue this week, though, is not likely to make its way on board.

The cover of the magazine depicts Mr. Obama wearing a turban, while he offers a fist bump to his gun-toting wife. An American flag singes behind them in the fireplace.

Asked about the drawing at a news conference here Sunday, Mr. Obama held his tongue, saying: “I have no response to that.” A campaign spokesman, though, was not so measured at a sketch that the magazine calls satirical.

“The New Yorker may think, as one of their staff explained to us, that their cover is a satirical lampoon of the caricature Senator Obama’s right-wing critics have tried to create,” the spokesman, Bill Burton, said in a statement. “But most readers will see it as tasteless and offensive –- and we agree.”

The cover of the July 21 issue is entitled, “The Politics of Fear.” A news release to promote the magazine said artist Barry Blitt “satirizes the use of scare tactics and misinformation in the presidential election to derail Barack Obama’s campaign.”

Asked about the cover, Tucker Bounds, spokesman for Senator John McCain’s campaign, said: “We completely agree with the Obama campaign.”

David Remnick, the editor of the magazine, defended his choice of covers in an interview with the Huffington Post. He said, “Obviously I wouldn’t have run a cover just to get attention — I ran the cover because I thought it had something to say. What I think it does is hold up a mirror to the prejudice and dark imaginings about Barack Obama’s — both Obamas’ — past, and their politics.

“I can’t speak for anyone else’s interpretations, all I can say is that it combines a number of images that have been propagated, not by everyone on the right but by some, about Obama’s supposed “lack of patriotism” or his being “soft on terrorism” or the idiotic notion that somehow Michelle Obama is the second coming of the Weathermen or most violent Black Panthers. That somehow all this is going to come to the Oval Office.”

Posted by Jared Calaway at 9:23 PM

The only reason that this Mr. & Mrs. Obama satire DOES have impact — and may very likely spread — is because like all good satire, or good humor for that matter, there’s more than a germ of truth in it. Otherwise, the satire would utterly roll off the Obamoids’ backs, having no impact.

But this is assuming that this satire is really directly about the Obamas instead of their opponents. It seems the intention of the satire is against their right-wing opponents who have painted them this way. The "truth" stands in the weird accusations.

But what is the possible truth here, other than Obama's father was Muslim? The satire can only work if people recognize how silly and, in fact, dangerous it is to identify "Islam" writ-large with figures like Osama bin Laden--the point of the article is the "politics of fear" and the dangers that lie therein. It is this politics of fear that people who paint Obama this way rely upon. It makes just as much sense to equate Christianity with Timothy McVeigh.

I wish all satire that relied upon stereotypes and misinformation would roll off people's backs.

Extremely thought provoking stuff. Whatever be the case, one needs to do some research and analysis.