The Science of the Stars: The Antikythera Mechanism 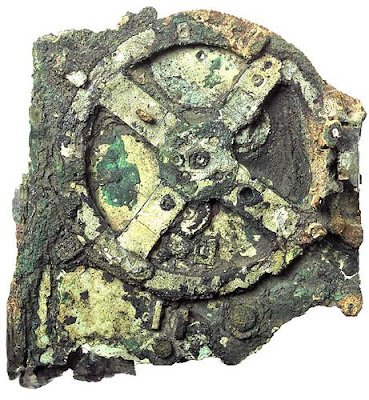 The first-century BCE Antikythera Mechanism, sometimes called the world's first analog computer, has received renewed study with X-Ray technology--so, from the world of art with van Gogh repaints (see post from yesterday) to the ancient world of science, this X-Ray technology is always revealing new things, giving us better understandings of the development of art and science. What can this device do? It predicted solar eclipses, kept track of the Olympiad, and, I gather, helped reconcile solar and lunar calendars. We often recognize ancient abilities to keep track of astronomical events--they could see the stars far better than we can (or any of us who live close to any large city or town) because of modern light pollution-- but we sometimes forget how technologically advanced ancient peoples were. See NYTimes article here (and reprinted below) and Nature.com article here.

After a closer examination of a surviving marvel of ancient Greek technology known as the Antikythera Mechanism, scientists have found that the device not only predicted solar eclipses but also organized the calendar in the four-year cycles of the Olympiad, forerunner of the modern Olympic Games.

The new findings, reported Wednesday in the journal Nature, also suggested that the mechanism’s concept originated in the colonies of Corinth, possibly Syracuse, on Sicily. The scientists said this implied a likely connection with Archimedes.

Archimedes, who lived in Syracuse and died in 212 B.C., invented a planetarium calculating motions of the Moon and the known planets and wrote a lost manuscript on astronomical mechanisms. Some evidence had previously linked the complex device of gears and dials to the island of Rhodes and the astronomer Hipparchos, who had made a study of irregularities in the Moon’s orbital course.

The Antikythera Mechanism, sometimes called the first analog computer, was recovered more than a century ago in the wreckage of a ship that sank off the tiny island of Antikythera, north of Crete. Earlier research showed that the device was probably built between 140 and 100 B.C.

Only now, applying high-resolution imaging systems and three-dimensional X-ray tomography, have experts been able to decipher inscriptions and reconstruct functions of the bronze gears on the mechanism. The latest research has revealed details of dials on the instrument’s back side, including the names of all 12 months of an ancient calendar.

In the journal report, the team led by the mathematician and filmmaker Tony Freeth of the Antikythera Mechanism Research Project, in Cardiff, Wales, said the month names “are unexpectedly of Corinthian origin,” which suggested “a heritage going back to Archimedes.”

No month names on what is called the Metonic calendar were previously known, the researchers noted. Such a calendar, as well as other knowledge displayed on the mechanism, illustrated the influence of Babylonian astronomy on the Greeks. The calendar was used by Babylonians from at least the early fifth century B.C.

Dr. Freeth, who is also associated with Images First Ltd., in London, explained in an e-mail message that the Metonic calendar was designed to reconcile the lengths of the lunar month with the solar year. Twelve lunar months are about 11 days short of a year, but 235 lunar months fit well into 19 years.

“From this it is possible to construct an artificial mathematical calendar that keeps in synchronization with both the sun and the moon,” Dr. Freeth said.

The mechanism’s connection with the Corinthians was unexpected, the researchers said, because other cargo in the shipwreck appeared to be from the eastern Mediterranean, places like Kos, Rhodes and Pergamon. The months inscribed on the instrument, they wrote, are “practically a complete match” with those on calendars from Illyria and Epirus in northwestern Greece and with the island of Corfu. Seven months suggest a possible link with Syracuse.

Inscriptions also showed that one of the instrument’s dials was used to record the timing of the pan-Hellenic games, a four-year cycle that was “a common framework for chronology” by the Greeks, the researchers said.

“The mechanism still contains many mysteries,” Dr. Freeth said. Among the larger questions, scientists and historians said the place of the mechanism in the development of Greek technology remained poorly understood. Several references to similar instruments appear in classical literature, including Cicero’s description of one made by Archimedes. But this one, hauled out of the sea in 1901, is the sole surviving example.

Astronomy (or Astrology), the study of the stars, and the concomitant importance of the calendar were extraordinarily important aspects of ancient culture--the ancient science of the study of the heavens not only was important for calendrical purposes, but also had a strong imprint on religious belief and practice, with the ancient Babylonians, Jews, Greeks, Egyptians, Romans, etc. In order to understand their religious traditions, one must keep an eye on the stars. In fact, in a partial answer to one of my questions yesterday, the importance of astrological events for religious life would probably approach the prevalence of the evil eye, although the systematic study of astrological events can be tracked with much greater accuracy, beginning with the ancient Babylonians and spreading out from there. Nonetheless, somewhat less systematic observations of the heavens can be found throughout the ancient Mediterranean and the ancient near east.

Fragments of the Antikythera Mechanism, an ancient astronomical computer built by the Greeks around 80 B.C. It was found on a shipwreck by sponge divers in 1900, and its exact function still eludes scholars.

Posted by Jared Calaway at 9:41 AM

Thanks for a fascinating article!
Kaz