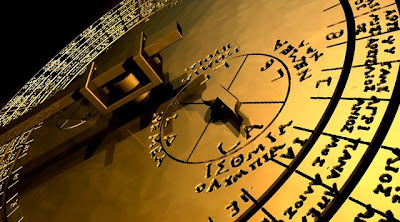 A long long time ago, I posted on the news of the "world's first computer," the Antikythera Mechanism, a first-century-BCE device which predicted lunar and solar eclipses, the dates of the Olympic games, tracked the position of the planets, etc.

Well, someone has now been able to reconstruct a working replica according to Yahoo! News and Wired.com.

Here is the article in toto:

A British museum curator has built a working replica of a 2,000-year-old Greek machine that has been called the world's first computer.

A dictionary-size assemblage of 37 interlocking dials crafted with the precision and complexity of a 19th-century Swiss clock, the Antikythera mechanism was used for modeling and predicting the movements of the heavenly bodies as well as the dates and locations of upcoming Olympic games.

The original 81 shards of the Antikythera were recovered from under the sea (near the Greek island of Antikythera) in 1902, rusted and clumped together in a nearly indecipherable mass. Scientists dated it to 150 B.C. Such craftsmanship wouldn't be seen for another 1,000 years — but its purpose was a mystery for decades.

Many scientists have worked since the 1950s to piece together the story, with the help of some very sophisticated imaging technology in recent years, including X-ray and gamma-ray imaging and 3-D computer modeling.

Now, though, it has been rebuilt. As is almost always the way with these things, it was an amateur who cracked it. Michael Wright, a former curator at the Science Museum in London, has built a replica of the Antikythera, which works perfectly.

In the video from New Scientist below, Wright shows how the machine works.

In short, Antikythera's user interface is deceptively simple, operated by a simple knob on the side. This conceals the intricacy within, amounting to a complex mathematical model, tracking the movements of planetary bodies and incorporating a series of submechanisms to account for the eccentricities of their rotation.

A dial on the faceplace featured the Greek zodiac and an Egyptian calendar; pointers showed the location of the moon and the five planets known at the time. On the machine's back, an upper dial shows a 19-year calendar (matching the solunar cycle) and the timing of upcoming Olympic games. A lower dial shows a 76-year cycle (when the Olympic and solunar cycles coincide) and indicates the months in which lunar and solar eclipses can be expected.

According to New Scientist, this is the first working model of the Antikythera computer to include all of the device's known features. And, like the original machine, it has been built of recycled metal plates. That's right: The Antikythera mechanism is not only the world's oldest computer, it's also the world's first green computer.

Here's the video mentioned above: