With the large growth of the Catholic population in the U.S., mostly due to the influx of immigration from Latin America, combined with a huge downturn in the number of Catholic seminarians, the Catholic Church in the U.S. is experiencing a priest shortage. 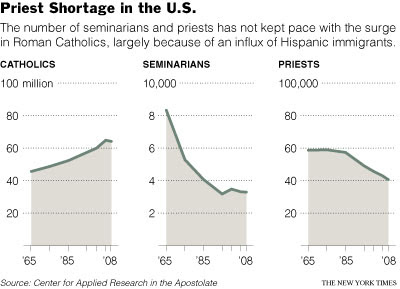 In an attempt to rectify this problem, many U.S. dioceses are recruiting priests from around the world, particularly Africa and Latin America, but also places like India, to fill churches in places like Kentucky (which has seen a surge in Latin American immigration in the past 10 years). Foreign priests-to-be also make up about 1/3 of all Catholic seminarians in the U.S.

The shortage is to the point that many priests, at the moment, have to serve four or five churches at the same time, rushing from church to church to perform mass. It is a crazy lifestyle, but one that reminds me of what the Methodists did in the 19th century, when their ministers had to circulate from church to church on horseback.

See the full, rather lengthy, article here.
Posted by Jared Calaway at 10:30 AM